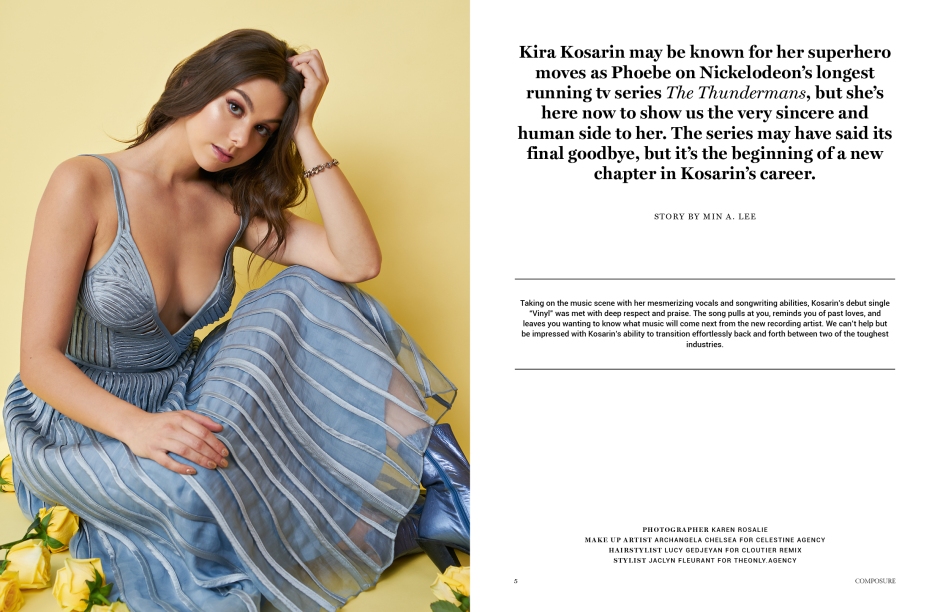 STORY BY MIN. A. LEE

STYLING BY JACLYN FLEURANT FOR THE ONLY.AGENCY

Kira Kosarin may be known for her superhero moves as Phoebe on Nickelodeon’s longest running tv series The Thundermans, but she’s here now to show us the very sincere and human side to her. The series may have said its final goodbye, but it’s the beginning of a new chapter in Kosarin’s career.

Taking on the music scene with her mesmerizing vocals and songwriting abilities, Kosarin’s debut single “Vinyl” was met with deep respect and praise. The song pulls at you, reminds you of past loves, and leaves you wanting to know what music will come next from the new recording artist. We can’t help but be impressed with Kosarin’s ability to transition effortlessly back and forth between two of the toughest industries.

For our 20th issue, Kosarin shares with us more on her journey from a young teen actress to a self-confident woman—no cape, no mask, no disguises.

Composure Magazine: Looking back, what were some of the most valuable lessons you learned while working on Nickelodeon’s The Thundermans?

Kira Kosarin: I learned how big the world is, and how much smaller it feels when you travel the world. I am grateful to Nickelodeon for all the incredible experiences I had while doing international promo for the show.

CM: How does it feel to shed the image of Phoebe and share more of yourself with the world?

KK: It’s a relief to be able to share myself in a more authentic way, even if it does open me up to a lot more criticism. People are very used to a preconceived notion of who I am or rather who I was as a young teen on television.