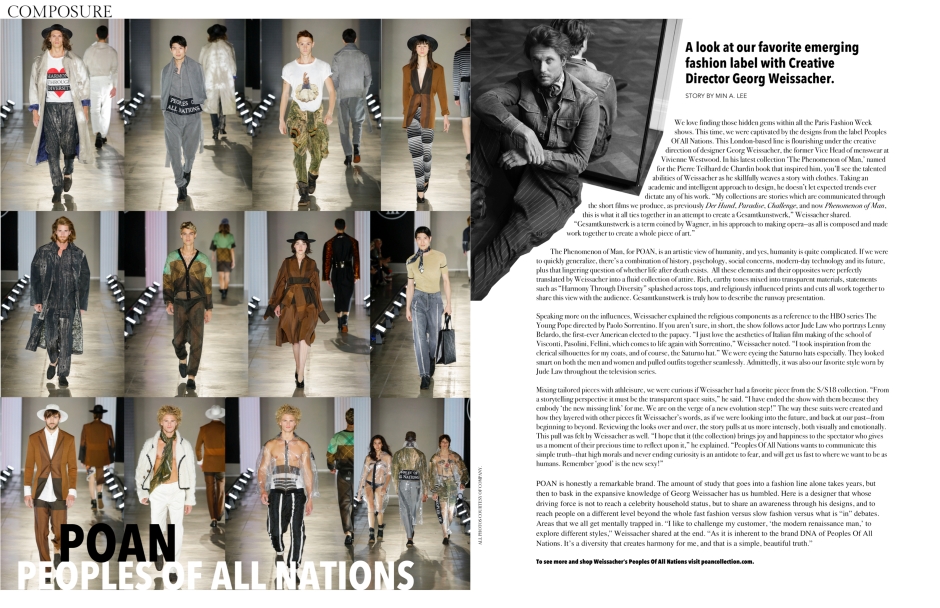 A look at our favorite emerging fashion label with Creative Director Georg Weissacher.

Story by Min A. Lee

We love finding those hidden gems within all the Paris Fashion Week shows. This time, we were captivated by the designs from the label Peoples Of All Nations. This London-based line is flourishing under the creative direction of designer Georg Weissacher, the former Vice Head of menswear at Vivienne Westwood. In his latest collection ‘The Phenomenon of Man,’ named for the Pierre Teilhard de Chardin book that inspired him, you’ll see the talented abilities of Weissacher as he skillfully weaves a story with clothes. Taking an academic and intelligent approach to design, he doesn’t let expected trends ever dictate any of his work. “My collections are stories which are communicated through the short films we produce, as previously Der Hund, Paradise, Challenge, and now Phenomenon of Man, this is what it all ties together in an attempt to create a Gesamtkunstwerk,” Weissacher shared. “Gesamtkunstwerk is a term coined by Wagner, in his approach to making opera—as all is composed and made to work together to create a whole piece of art.”

The Phenomenon of Man, for POAN, is an artistic view of humanity, and yes, humanity is quite complicated. If we were to quickly generalize, there’s a combination of history, psychology, social concerns, modern-day technology and its future, plus that lingering question of whether life after death exists.  All these elements and their opposites were perfectly translated by Weissacher into a fluid collection of attire. Rich, earthy tones mixed into transparent materials, statements such as “Harmony Through Diversity” splashed across tops, and religiously influenced prints and cuts all work together to share this view with the audience. Gesamtkunstwerk is truly how to describe the runway presentation.

Speaking more on the influences, Weissacher explained the religious components as a reference to the HBO series The Young Pope directed by Paolo Sorrentino. If you aren’t sure, in short, the show follows actor Jude Law who portrays Lenny Belardo, the first-ever American elected to the papacy. “I just love the aesthetics of Italian film making of the school of Visconti, Pasolini, Fellini, which comes to life again with Sorrentino,” Weissacher noted. “I took inspiration from the clerical silhouettes for my coats, and of course, the Saturno hat.” We were eyeing the Saturno hats especially. They looked smart on both the men and women and pulled outfits together seamlessly. Admittedly, it was also our favorite style worn by Jude Law throughout the television series.

Mixing tailored pieces with athleisure, we were curious if Weissacher had a favorite piece from the S/S18 collection. “From a storytelling perspective, it must be the transparent space suits,” he said. “I have ended the show with them because they embody ‘the new missing link’ for me. We are on the verge of a new evolution step!” The way these suits were created and how they layered with other pieces fit Weissacher’s words, as if we were looking into the future, and back at our past—from beginning to beyond. Reviewing the looks over and over, the story pulls at us more intensely, both visually and emotionally. This pull was felt by Weissacher as well. “I hope that it (the collection) brings joy and happiness to the spectator who gives us a moment of their precious time to reflect upon it,” he explained. “Peoples Of All Nations wants to communicate this simple truth—that high morals and never ending curiosity is an antidote to fear, and will get us fast to where we want to be as humans. Remember ‘good’ is the new sexy!”