“Futuristic Folklore” is a befitting title to understanding HyeJin Yoo’s perspectives on spring fashion with her presentation for KUMANN YOO HYE JIN 2015.  This isn’t a collection for those who prefer safer, ready-to-wear lines. This is about appreciating symbolism, engineering and a bit of mathematics.  Beauty is found within the heavily structured looks with a nod towards today’s science fiction animation and technology printed on pastel jacquards, organzas and cottons.  Yes, those are definitely spaceships.  If you aren’t into sci-fi, she has equally interesting and provoking designs in neutral to bright shades.

Yoo works endlessly to create masterpieces that are becoming the future we can expect from the Kumann studio, while she continues to build stability for the label.  We knew viewing her clothing would bring thoughtful discussion, so we reached out to learn more about this designer that expertly molds together so many contrasting ideas into a well-balanced and fluid collection.

Audrey Magazine: When you became the head of Kumann, how did you want to redefine the label, and how do feel that style translates into your current SS 2015 collection?

HyeJin Yoo: Kumann is the name originated from the early studio of the company. When I decided to start working on the label, I felt that I needed to reconsider the story of the studio, and its original value and identity. I have been re-identifying the brand’s characters in constructive design and original graphic patterns, which are based on different concepts of seasonal collections. Particularly, for spring and summer 2015, I interpret the concept of the future and folklore with specific color arrangements and computer-embroidered spaceship images made in 3D graphics.

AM: With the SS 2015 concept of “Futuristic Folklore,” have you always had an interest in those patterns and sci-fi animation?  What inspired you to put the two concepts together as one?

HJY: Sci-fi movies and ideas of cyborgs have been greatly influencing my ideas. I am directing the brand as a high-end boutique, but I do love to mix it up with images and symbols from sub-culture. I have also been very much interested in the theoretical ideas of time and space in a parallel universe, and in Buddhism. Basically, I think that people are very accustomed to a dichotomous way of thinking. Dualism affects our perceptions and languages by dividing things in the extreme, but I think that any of those two extremes could be blended just like other previous concepts, ‘Nostalgic Future’ and ‘Urban Shamanist’.

AM: What sort of emotions do you hope to evoke for viewers and wearers of your designs?

HJY: I am drawing a woman who wears uniqueness and originality of her own. I hope both viewers and wearers have exceptional experiences and at the same time will feel assertive and happy. – See the entire interview and more at: http://audreymagazine.com/inside-south-korean-label-kumann-yoo-hye-jin/#sthash.osq7wgVB.dpuf

A Fashion Week Debut Full Of Luxurious Textiles, Plus A Mix Of Bright Hues & Playful Youthfulness – Min A. Lee

Deola Sagoe and Clan (which is made up of Sagoe’s daughters Teni, Tiwa an Aba) successfully presented their New York Fashion Week debut collections full of color, youth and luxurious textiles.  Looking at the designs of Sagoe one can see how she draws upon Nigeria in a lovely mix tradition and current aesthetics in the fashion world.  Her line is filled of body conscious cuts with conversation-starting details from cut-out patterns to an iridescent sheen for shifting colors and then adding in echoes of Nigerian fabric patterns, all brought beautifully onto the main stages of New York.  We can see why Deola Sagoe is gaining world-wide notoriety and praise.

As we watched the models glide towards us, we could feel the bold presence in her designs—they truly speak for themselves.  This line is not meant to be taken lightly, but worn for that occasion you want to stand out.  Even in the neutral looks there are features that instantly pop out at viewers.  We hope to see more of Sagoe at the coming fashion week industry events and anticipate her future collections.

CLAN interests us with their take on clothing collection availability.  While nearly all designers offer two main collections, one for fall/winter and one for spring/summer, CLAN decided to create truly timeless designs in the sense that “these pieces will be available all year round in chosen variations and upon personal requests,” explained Teni Sagoe.

While viewing the debut, we felt an immediate sense of playful, youth with a bit of urban wear appeal.  Amping up the paints with open-mesh appeal, draping and mixed-media was a fresh take for the on-going trend.  One of our favorites was a phonetic spelling for laid back (laid-back) splashed across a silky top.

A perfect descriptor for parts of the CLAN collection with its easy-to-wear designs and casual coolness.  There’s even a comfort appeal to the more complicated designs we appreciate.   When it comes to fashion, we are always on the hunt for compelling designs with functionality. 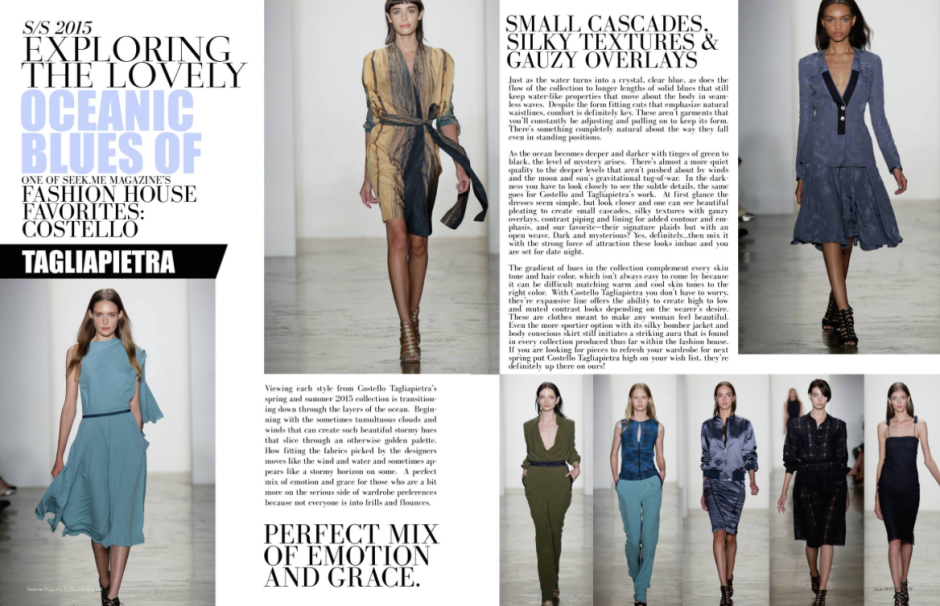 Viewing each style from Costello Tagliapietra’s spring and summer 2015 collection is transitioning down through the layers of the ocean.  Beginning with the sometimes tumultuous clouds and winds that can create such beautiful stormy hues that slice through an otherwise golden palette.  How fitting the fabrics picked by the designers move like the wind and water and sometimes appear like a stormy horizon on some.  A perfect mix of emotion and grace for those who are a bit more on the serious side of wardrobe preferences because not everyone is into frills and flounces.

Just as the water turns into a crystal, clear blue, as does the flow of the collection to longer lengths of the hue while keeping water-like properties that move around the body in seamless waves.  Despite the form fitting cuts that emphasize natural waistlines, comfort is definitely key. These aren’t garments that you’ll constantly be adjusting and pulling on to keep its shape.  There’s something completely natural about the way they fall even in standing positions.

As the ocean becomes deeper and darker with tinges of green to black, the level of mystery arises. There’s almost a more quiet quality to the depths that aren’t pushed about by winds and the moon’s gravitational tug-of-war.  In the darkness you have to look closely to see the subtle details, the same goes for the design duo’s work.  At first glance the dresses seem simple, but look closer and one can see beautiful pleating to create small cascades, silky textures with gauzy overlays, contrast piping and lining for added contour and emphasis, and our favorite—their signature plaids but with an open weave.  Dark and mysterious? Yes, definitely…then mix it with the strong force of attraction these looks imbue and you are set for date night.

The gradient of hues in the collection complement every skin tone and hair color, which isn’t easy to come by because it can be difficult matching warm and cool to the right color—you don’t have to worry, they’re expansive line offers the ability to create looks depending on the wearer’s desire.  These are clothes meant to make any woman feel stunning.  Even the more sportier option with its silky bomber jacket and body conscious skirt still initiates a striking aura that is found in every collection produced thus far.  If you are looking for pieces to refresh your wardrobe for next spring put Costello Tagliapietra high on your wish list, they’re definitely up there on ours.

For those of us living metropolitan lives, caught in the constant daily movements between coffee and career, Iikonee lets us slow down and learn an appreciation for simplicity.  Clothing becomes a reflection of our lives, and there is beautiful classicism to be found within the line’s Spring & Summer 2015 looks.  Vivid white offset by classic navy and black make up the entire architecturally inspired collection, but with comfort and ease.  Spring usually entails overcrowded patterns and bright, summery palettes, but Iikonee keeps to traditional minimalist expectations. 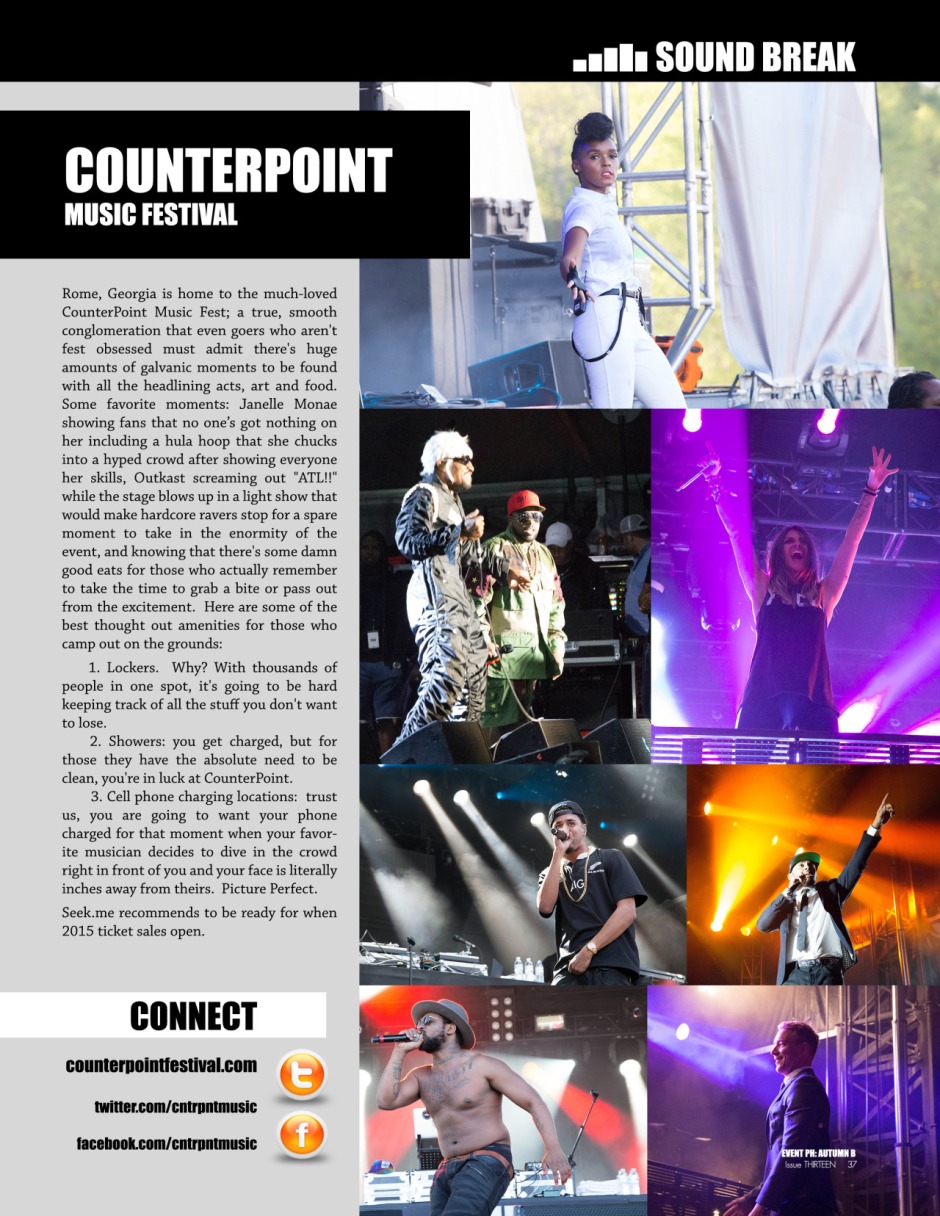 3 Fashion Trends To Consider From The Pre-Fall 2016 Collection Shows – Read The Full Article Along With Some Of My Favorite Looks At Audreymag.com 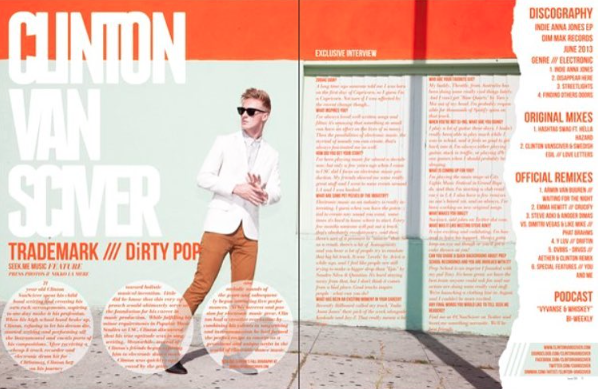 Public School is how I remember and still think about New York City fashion—minimal and monochromatic.  Most would associate the darker end of the spectrum for fall and winter, but New Yorkers find a way to make it work throughout the entire year.  With a closet full of black, I’m always on the hunt for design houses that take my favorite color and translate it into wearable garments regardless of temperature.  Fairly new and with a sophisticated nod to urban and street trends, Dao-Yi Chow and Maxwell Osborne have finally made their introduction into womenswear.

While in its sophomore year of New York Fashion Week, Public School already has accumulated menswear awards and continues to do so. They’ve shown talent and drive for surviving in the industry since their 2010 induction into the CFDA’s Fashion Incubator development program, and still keep all clothing production within New York City.  With so much praise to their names, I was curious to see how the pair would tackle the other gender, and was delighted to see that they are definitely on their way to dominating the interchangeable world of sportswear.  While some feel their designs are more quiet than expected for spring and summer 2015, Chow and Osborne have a long and limitless future ahead of them.

Take a look at a few of the designs below from Sunday’s packed-house show.  It was a sea of artsy prints, geometrics, oversized fits, boxy styles and my favorite, a monochromatic palette with splashes of blue for creating additional visual interest.  I’m more impressed with Chow and Osborne producing flattering and classic cuts while keeping some urban edge, making their opening womenswear collection engaging to both the career woman and the streetstyle lover.  With such a strong start, the fall and winter 2016 line will be highly anticipated, and I am positive we will see another round of solid design work. – See more at: http://audreymagazine.com/public-school-the-perfect-nyc-streetstyle/#sthash.t2mmcexP.dpuf

Images Courtesy Of Audrey Magazine Via Guillame Roujas and Nowfashion.com